Tsvetan Vassilev, a fugitive Bulgarian banker currently wanted by Interpol, used to own a lot of companies in Bulgaria, among them the country’s biggest telecom, Vivacom, and the television station TV7. 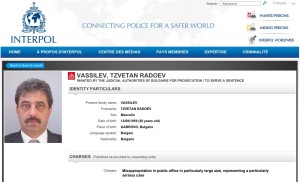 When he went on the lam, officials of a company called LIC 33 (it stands for Louvrier Investment Company) held a news conference in March of this year to say they had bought up all his properties for the symbolic sum of € 1.

The company is managed by Russian-Belgian businessman Pierre Louvrier, pictured below in his Facebook account with Igor Strelkov, the former defense minister of the separatists in Donetsk, who he describes as a “contemporary hero”. 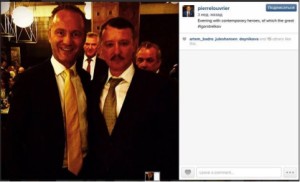 But an investigation by Bivol conducted while working for the Internet Ownership Project also revealed that behind the scenes, LIC 33 and Louvrier are in business together with wealthy Russian businessman Konstantin Malofeev, one of President Vladimir Putin’s more controversial cronies.

After Vassilev’s connections to Louvrier were revealed, on June 8 the Bulgarian state blocked Vassilev’s assets. On July 23, Louvrier told Reuters that his Vivacom shares had « reverted back » to Vassilev and he no longer had « any interest in these assets. »

Vassilev is now living in Belgrade and is fighting an extradition request from the Bulgarian prosecution. He faces accusations of syphoning funds from the Corporate Commercial Bank that collapsed last summer.

He was the main shareholder in the bank, which was remarkably helpful to his business interests, lending him money to buy Vivacom, TV7 and two military factories. Prosecutors accuse him of large-scale embezzlement, representing a particularly serious case (art. 203 of Bulgarian Criminal Code punishable with imprisonment from 10-20 years)

Malofeev is a controversial businessman close to Putin. He has been sanctioned by Canada and the European Union for financing pro-Russian fighters in eastern Ukraine. After Bivol’s story appeared, Bulgarian tax authorities froze the shares of the companies involved in the deal.

But Malofeev is not the only Russian with interests in Vivacom. The Russian bank VTB is a minority shareholder of Vivacom via its investment arm, VTB Capital. The Bulgarian branch of VTB is controlled by former Bulgarian Finance Minister Milen Velchev and his brother. The telecom company owes VTB US$ 150 million.

On its website, LIC 33 lists an address in Paris which is actually a rented mailbox. There is no company named LIC 33 registered in France, although there is one in Luxembourg. A search in the Luxembourg registry of companies found that the firm S.H.C.O. 79, the ultimate owner of Vivacom shares, has changed ownership and is now listed as LIC 33.

Louvrier, who owns LIC 33, is a Belgian who is connected to Russian power structures. He is the former manager of the company Kemira, which owns the military factory Dunarit, one of the assets formerly controlled by Vassilev.

Louvrier has often tweeted his sympathy for Putin’s regime on the social network Twitter, which preserves a record of his praise a year ago and his celebration of the annexation of Crimea in the company of French actor Gerard Depardieu. The pictures from the party were later deleted from Instagram, but some remain on Facebook.

In July 2015, Louvrier’s lawyers sent a statement to Bivol. “To say that Mr. Louvrier is Putin’s crony is wholly inaccurate,” the letter says. « Mr. Louvrier and President Putin do not even know each other…You cannot extrapolate his political views from a couple of dated, social media comments and moreover, nowhere in these comments did Mr Louvrier specifically express support for Mr Putin. »

The statement is related to the fact that Bivol quoted Louvrier’s Twitter and Instagram postings, in which he celebrates « Crimea’s reunification to Russia » with “new Russian” Depardieu.

Bivol found a number of connections between Louvrier and Malofeev. In November 2014, Louvrier’s CFG Capital and Malofeev’s Marshall Capital concluded partnership agreements for investments in the technology sector.

An American named Jack Hanick was introduced to TV7 employees as representing the station’s new owner. Hanick says he is a television producer, formerly for Fox News in the US and now for Russia’s Tsarygrad TV, which was funded by Malofeev.

Giannis Karageorgis, a Greek national, is the man who bought TV7 and a friend of the sanctioned Malofeev, who is banned from traveling in the European Union. “This weekend, my Greek friend who invited me to be the best man at his wedding had to come to me (in Moscow) to have his wedding with 90 Greeks, instead of me going to him,” complained Malofeev in an interview with the online publication Slate. This friend was Karageorgis.

Recently the Bulgarian Registry of Companies rejected an attempt to replace the TV7 Board of Directors because the new ownership structure has not yet been officially registered. The plan was for Hanick to take over the management, together with Nikolai Malinov, the former editor of the newspaper Duma.

Duma is the official newspaper of the Bulgarian Socialist Party, voicing pro-Russian and anti-sanctions positions. Malinov is a member of the movement of the Bulgarian Russophiles. He became famous after the Crimea annexation in 2014, when on TV he saluted “all the Slavonic people (for winning) the 4th Crimea war.”

All Stories from Bulgaria