The Czech Republic has one of the more vibrant Wi-Fi communities in the world, thanks to the short-sighted behavior of SPT Czech Telecom (CT), back in the days when it controlled the market.

When CT jacked up prices by 60 percent in the late 1990s, Czech do-it-yourselfers took matters into their own hands.

At the time, CT was the country’s sole provider of Internet via phone lines (ADSL) service and charged around a half of an average month’s salary for not-terribly-dazzling 256 kbps data transfer speed. While few could afford those rates, demand for internet was strong and growing stronger, prompting various entrepreneurs to begin offering wireless internet service at more affordable rates.

Today the Czech Republic has the most Wi-Fi subscribers in the European Union, with more than 2,000 registered wireless internet service providers (ISPs) in a country of 10 million people or one for every 5000 people. Wi-Fi is the country’s first choice for internet and the number of subscribers continues to grow.

A mobile application called Wifič (Get Out) even provides passwords to more than 4,000 Wi-Fi hot-spots in the Czech Republic and Slovakia. 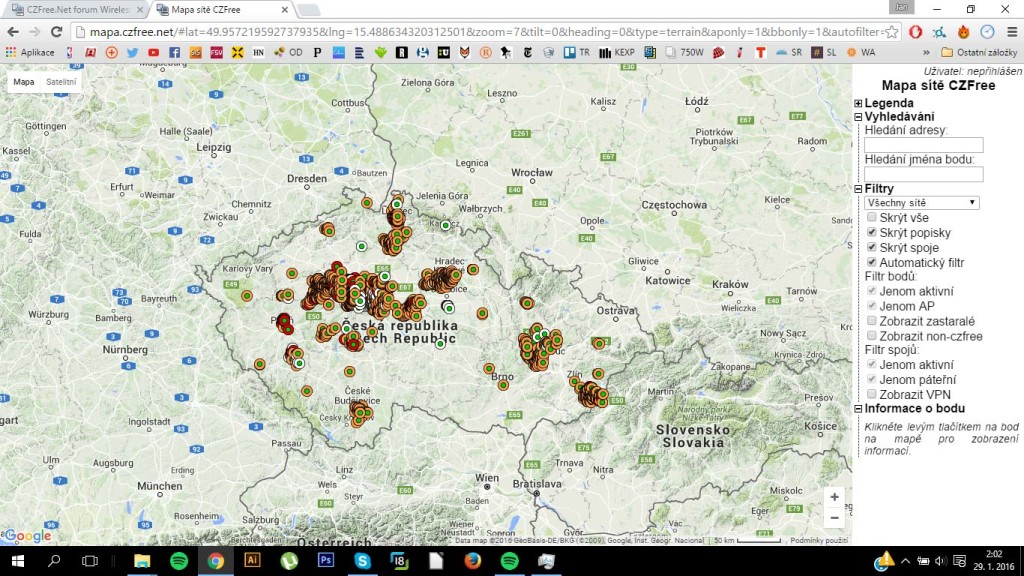 Adam Golecký of NIX, the largest Czech internet exchange point (IXP), says that Czechs have a unique, community-based Internet thanks to “a big community of people who are working to make the Czech Internet network accessible, almost for free. They don’t make any profit providing the Internet to members

The phenomenon, he says, “is unique. People from the US are coming to study it.”

The community of do-it-yourself small Internet networks is called the Czech Free Net and it was built from scratch using essentially duct tape and wire. Today it has been professionalized and links together more than 60,000 households.

The main concept is to charge only enough to cover network development, without anyone making a profit.  The Czech Free Net’s founders also provided information about how people could build personal internet links out of readily available materials, avoiding ISPs altogether.

Once built, the link, called a Ronja (for Reasonable Optical Near Joint Access) could provide free Internet with no need for an ISP or possible interference from a government entity.

The tough part was getting it built, which required a high level of technical skill. Tomáš Bělonožník, an early adopter, recounts his struggles.

“I was a member of Czech Free Net for four years,” he says. “Sometimes, it was nerve-wracking. As there is no one supervising the network, there is also no one responsible and no one to fix your problems.”

The technology was vulnerable to certain types of weather, including heavy rain and fog. “So once, after a heavy rainstorm, we lost the Internet connection for one month. Rain put the antenna out of order and there was no one who could fix it,” he says.

But “after one month of sunny weather, the antenna dried out and we got back the Internet.”

Over time, the network developed support capabilities through online forums, and some of the regional networks developed into professional providers with 24/7 support through call centers. To date, however, there are no shareholders and earnings are invested back into infrastructure improvements.

Along with its Wi-Fi network, the Czech Republic is rich in optical fiber cables. The exact position of those cables is considered a trade secret, but in some cases the answers are obvious.

The lines generally utilize existing infrastructure: UPC uses oil and petrol pipes, Dial Telecom the gas pipelines and CD Telematica is using railroad structures. “It makes perfect sense. By using engineering infrastructure, you can avoid having to ask every single property owner if he wouldn’t mind having the cable in his backyard,” explains Golecký.

The company that grew out of Czech Telecom has built on its significant advantage as the inheritor of the telephone landline network. Today O2 is a key player in information communications technology (ICT), combining mobile phones, landlines, Internet and cable TV. O2 cooperates with the recently formed CETIN (Czech Telecommunication Infrastructure); both companies are a part of the PPF group, and while O2 takes care of the internet connection services, CETIN handles the vast cable network.

The infrastructure has been modernized, but it continues to benefit from its monopoly on some services. An analysis of electronic communications made by the Czech telecommunication Office/ČTÚ says O2 is considered to be blocking an effective competitive market.

According to Czech media and ICT experts, O2 (with the support of two mobile phone network operators) is behind the recent proposal by the Czech Ministry of Industry and Trade to charge for the use of unlicensed frequencies, such as those for Wi-Fi or 10 GHz band (the study: http://www.mpo.cz/assets/cz/e-komunikace-a-posta/Internet/2015/4/Analyza_freebands_20150417_upd.pdf).

Patrick Zandl, an ICT expert, says, “I think the charges idea was initiated by O2 management,” including owner Petr Kellner, to recoup money invested. If approved, the Czech Republic would be the first country in the world to charge for those frequencies, which would probably radically slow the development of Internet connectivity.

NIX.cz is the older and bigger of the two, with peak capacity of 360 gigabits per second (Gbps); it is one of the ten largest IXPs in Europe. NIX.cz also created a project called FENIX in response to intense denial-of-service (DoS) attacks in March 2013 that targeted Czech Internet services, media, banks and operators.

Peering.cz gained popularity thanks to its website Uloz.to, one of the biggest Czech file-sharing server where users can download movies and upload large files. Their data peak is 180 Gbps and, like NIX.cz, they are expanding their services to Slovakia.

At the top of the technological heap are the fiber-optic cables connecting the Czech Republic to the rest of the Internet world. “There are an undisclosed number of entry points located in undisclosed places,” is the most common answer to the question of where, exactly, the country’s international data cables are located.

The information on cross-border entry points and even who owns those cables is considered to be a strategic secret and is classified, so that even experts on Czech state cyber-security or some telecommunication officials don’t know it.

“I am not sure why this information is kept so hush-hush,” said NIX’s Golecký. “Terrorist attacks would be much more efficient by attacking some of Prague’s vital services, such as poisoning water sources or cutting-off electricity.”

All Stories from Czech-republic